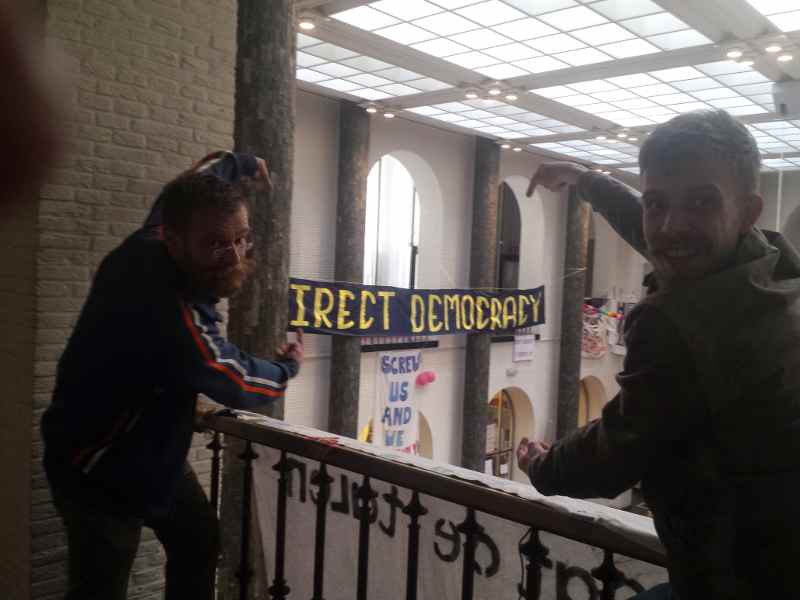 Representing the Bitcoin Embassy Amsterdam Association Martijn Wismeijer and Arthur Rommes visited our Bitcoin friend and volunteer Niels Harmsen ( of: http://E-gulden.org ) for moral support and to bring some food as a tangible contribution. With another Bitcoin friend he is actively participating ( by also living and sleeping there ! ) in the (temporary) occupation of the “Maagdenhuis’. A historic building in central Amsterdam normally used for various administrative functions of the University of Amsterdam. More info on Maagdenhuis and its rich history various and prior occupations ( the famous one in 1969! ): link to Wikipedia. 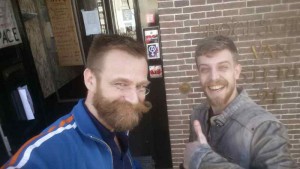 Arriving there we were warmly welcomed by the friendly security staff of the University sitting – as usual – behind the central reception desk. Outside another security person was enjoying his break smoking a cigarette mixing with other smoking protesters. We passed by many other occupiers and supporting visitors who also freely walked in and out the building. How different this scene was from other liberated or squatted (‘fortified’) buildings with grim-looking squatters etc. Coming into the central hall area we saw a sea of mostly youngish students glued to their laptop screens and others quietly listening to a full program of various speakers and presentations. Tomorrow our Bitcoin friend Niels is scheduled to speak. Navigating through the crowd we passed by several older grey haired academic staff members obviously also taking part in the protest. 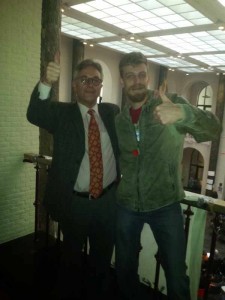 Next we sat down in the canteen area collectively run by the protestors to learn more about this occupation. We also handed over our food package ( with the much-needed coffee beans ) there a joint contribution of Bitcoin Embassy Amsterdam and Martijn Wismeijer’s MrBitcoin . We heard that the Maagdenhuis building with its protesters was rapidly becoming a major tourist destination for larger numbers of visitors and supporters coming there especially in the weekend! Clearly social media had been successful in getting the message out and rallying up general support for this ‘occupation’ and protest.

The latest news and development is a 10 Point Proposal by the Executive Board to the protesters: http://www.nltimes.nl/2015/03/10/univ-amsterdam-gives-10-point-proposal-to-protesters/

More fundamentally the ‘occupation’ and protest is about:
1. A general call for a more democratic alternative and change of the University of Amsterdam’s current governance away from the neoliberalism and authoritarianism era. Best explained by: https://www.opendemocracy.net/can-europe-make-it/nicholas-vrousalis-robin-celikates-johan-hartle-enzo-rossi/why-we-occupy-dutch-un
2. Public outrage about the disastrous financial state of affairs and general (financial) mismanagement by various consecutive Executive Board’s of the University over a longer period and a call to the Government, Parliament, City of Amsterdam and others for help.

The University of Amsterdam founded in 1604 has changed from a zero debt organization to a projected debt of Euro 400 million in 2018. The organization now spends 70 % of its annual budget on real estate and finance related costs leaving only 30 % for – its original purpose – education.

– from an educational institution into that of a property developer. Shortly before the financial crisis in 2008 they ( (un)knowingly ? ) signed up to the wrong side of an interest swap package for a total amount of Euro 255 million long running interest payment obligations at an interest percentage of 5 %.

The following news article gives a detailed explanation of what went wrong: http://www.groene.nl/artikel/het-maagdenhuis-als-profit-center

A more comprehensive analysis has been written by leading academics: Ewald Engelen and Reyer Hendrikse ( both University of Amsterdam ) and Rodrigo Fernandez ( University of Leuven, Belgium ) under the title: “Finance Penetrates its Other: A Cautionary Tale on the Financialization of a Dutch University” in Antipode Vol. 46 No.4 – 2014.

Bitcoin Embassy Amsterdam can only hope that a full investigation will follow thoroughly investigating the roles of various persons involved and into suspect transactions and/or shady dealings.
Our full support is with the protesters !